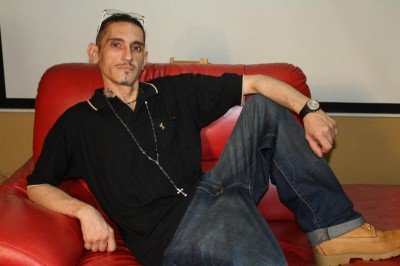 His name is Richard Torres and he was born and raised in New York City by his father and elderly Grandmother, His father Santos Torres was a starving artist who worked for the Waldorf Astoria as a kitchen worker and he remembers watching his father develop photos in his dark room and painting remarkable works of art that were lost and never seen by public eyes. It was these photos and works of art that lit a spark inside and inspired Richard to develop his own works of art in the future. Richard later attended Metropolitan College of N.Y. and majored in Human Services while exploring his passion for art and photography as well. During this time he did free-lance work for Q.V Magazine as a photographer and opened up Dream Makerz Photography Services in 1997 until 2000. He also made his own abstract art, which can be seen in his photography portfolio. The name Justice came from his past growing up as an active gang member in the streets of NY and also seeking to be part of something other than the everyday dysfunctional family like many of today’s youth. A Temporary escape from what he faced daily at home. Whatever was lacking at home he sought elsewhere. The name Justice is a firm reminder of where he came from and the obstacles he overcame to get to where and who he is today. Justice became an Aviance back in the early late 90's when Junior Vasquez was still the resident DJ at Sound Factory Dance Club in New York City. It was there he first met Mother Juan Aviance. "I have always seen Juan Aviance as an inspiration. He once mentioned that he wanted The House of Aviance to be more than just a Ballroom House and since that time, it has. It has grown in all aspects and is full of talented people who regardless of sexual orientation, nationality or gender, strive to be more than what they are. Juan believes that no matter your background or dark past, everyone deserves a chance to be better than what they are and follow their dreams”. At the present time Justice is working on Aviance Photography Services while fighting cancer. His hopes are to share his talents with everyone and grow with The House of Aviance in future endeavors. TO VIEW PORTFOLIO (click here): http://aviancephoto.polaroidstudio.com/slideshow.php?set_albumName=album02&transitionStyleShort=Dissolve&slideSpeed=2&v=22-57-06
ARTIST