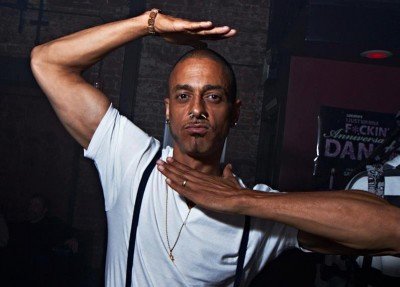 DJ Gehno Aviance Sanchez was born in Spain in 1972. He left Spain when he was 11 to live in Argentina for several years then finally came to the US in 1988. Gehno is first generation Aviance and became part of the House almost from the beginning in DC 1989. His fondest memories were watching Mother and Kevin Aviance carry on at Kindergarten Party while Jean Philippe Aviance was spinning. He recalls being “mesmerized as they vogued, threw-down, twisted and turned, I was transported to another world where music was energy and the body an instrument of perfection and that stayed with me for the rest of my life... I was only 17" Shortly after he begun dj'ing in Washington DC in 1993 where he joined The Snowball Collective, a group of djs that also produced local Raves. Gehno become known for his style of funky breaks and house with heavy baselines and house overtones and sometimes even surprises his audience with an eclectic set of Hip-Hop and Bass or an old-skool House set. DJ Gehno Aviance currently resides in San Francisco and was the owner of Amaru Galler on Valencia and 16th (closed as of 2007). You can catch him as the resident DJ at Bad Faerie Fridays www.badfaeriefridays.com. Gehno has also played all over the country including: Buzz (DC), the Edge (DC), Save the Robots (NYC), Mystic Family Circus (SF/LA), Bar 13 (NYC), Capitol Ballroom (DC), Ultraworld (BALT), The Stud (SF), Underground SF (SF), Cellspace (SF), El Rio (SF), Zodiac (SF), Academy of Arts Fashion Show (SF), Amaru Gallery (SF), The Powerhouse (SF), Frolic (SF).  LISTEN/DOWNLOAD GEHNO'S SETS HERE: http://soundcloud.com/djgehnoaviance
ARTIST