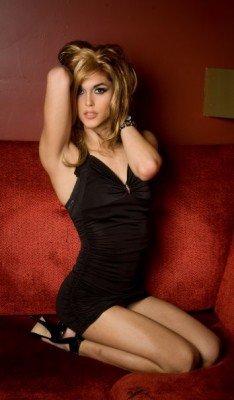 I became Jazmin Aviance when I was 19 years old. I use to sneak into gay bars and clubs using my older brothers ID. I was fresh to the gay scene so it's not like anyone knew how old I really was. I remember watching Sister Act II as a child and that's when I think I realized I wanted to be a performer and a star! I met EJ Aviance through an ex of mine and I remember him saying to me (when I was a boy) "Are you wearing make-up? Cuz ur giving me face"! I had no idea what he meant and that's when he took me under his wing. He first introduced me at an after-hours club (still as a boy) and Zuni and I performed as back up while EJ turned it to some circuit mix of "You Spin Me Right Round, Baby Right Round". Eventually I found myself at a drag bar thinking "I could so do this" and so I did. I performed as Jazmin Aviance for the first time at Hoedowns (a small gay bar that no longer exists in Atlanta) for Charlie Browns Drag Idol Prelims. It was a competition for $500.00, I won and from that point on I dedicated myself to Drag. Nicole Paige Brooks and EJ Aviance were best friends; they even shared the cover of Creative Loafing years back. The first thing Nicole said to me was "You're a woman" (I met her as a boy with baggy jeans and a crooked hat), she was right. Nicole really helped mold Jazmin into a character, she humbled me and taught me how to talk on a mic and how to be fierce and fishy at the same time. She started out as my Godmother, as she put it. I am very thankful to have met both of them and to have them in my life. They made one hell of a creation, if I say so myself. As my fame grew a few rumors were circulating as to “if” I was an official Aviance member or not. I contacted Mother Juan on Facebook to introduce myself as EJ's child from Atlanta. He took me in with open arms and shared his thoughts with me. I really felt loved whenever I got a notification that Mother Juan Aviance had made a comment on one of my YouTube videos. The moment I got the first comment I immediately started working harder on my performance and put more thought into what I was going to do next. Mother Juan told me, “not just anyone can have the Aviance name” and Avi'ously that made a girl feel special. During my final years in Atlanta I gained two sons who I love as if they were my own, William Aviance and Mark Aviance. They're both my little stars. We all lived in a big house in Midtown and WOW, talk about a show honey… that was a non-stop Drag show. After performing in the gay scene in ATL for a few years with consistent bookings and non-stop dancing, I had to take a break... So I decided to move to California and tap into one of my secret desires... to be a porn star. I know some people don't agree with it but whatever, too each their own. Right now I have had huge success in the adult industry. A website that is about to launch, I'm the number one model on the number one transsexual adult site, and a top model on every major Transsexual adult site in the U.S. I plan on eventually getting back into performing but right now I'm focusing on my new career and hosting TS Parties in Southern California. With that said, being an Aviance I will always strive for the best and being the best at whatever I'm doing. For those concerned… I decided to change my name going into the adult industry because I did not want to dirty the Aviance name "Per Se". Being an Aviance is so much more than my adult career. I can honestly say I know 100 percent that EJ and Mother Juan will be there for me no matter what... even when I get old and ugly. - Jazmin Aviance
PERFORMER