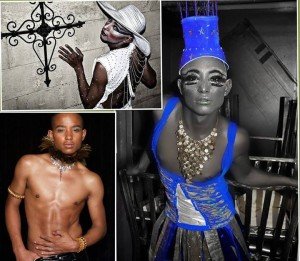 Jovan has been performing for over 12 years now and he got his start doing drag shows and Michael Jackson impersonations in Denver, Colorado. He has choreographed routines for dance troupes, drag competitions and raves. he has performed on stage in front of up to 50,000 people before. While keeping a low profile for a number of years, Jovan decided it was time to do something for himself and the gay party scene. After becoming a member of the House of Aviance, Jovan went on the path of making a name for himself and with his iconic Cosmic Church Lady alter-ego. Jovan Aviance is known for his unique outfits, distinctive hats, his bubbly attitude and of course, Swarovski Crystals glued all over his body. if there is a party worth going to, you can be sure Jovan Aviance will be there. He performs frequently at Reflex in West Hollywood, which has been named best afterhours in the country. As of November 11th 2010 Jovan met up with elder House member Papa Joe Aviance and it seems as if Jovan will be working along side Papa Joe in the near future.
PERFORMER