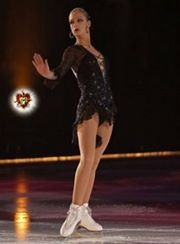 (Below is Mother Aviance's Personal Story of meeting Nicole) I HAVE NICOLE'S BLESSING/PERMISSION TO WRITE & SHARE THIS STORY! Dear Friends and Family, I'd like to share a few videos that were sent to me by a very dear friend who I loved and admired for many years. My first admiration for this person was as a U.S. Figure Skating Champion and then years later we met and became friends. Her name is Nicole Bobek and here is a little bit of our story. As some of you know I'm a figure skating fanatic! In the 90’s one of my favorite skaters was Nicole Bobek. I simply loved her beauty, grace & style on the ice and I knew for some reason I'd meet her someday. Although at the time I wasn’t sure why I felt this way, it is only now that everything has come full circle. Nicole and I first ran into one another at club Spirit in NYC (like 2005). I actually gasped when I seen her on the dance floor and called her name out loud like a crazy person! Nicole giggled, waved and said hello but it seemed as if she wanted to keep her identity anonymous which I totally respected. I did however mention to a few friends, "DO U KNOW WHO THAT IS" and each time Nicole would catch me pointing at her but she smiled gracefully. Anyway we danced a bit and I then gave her my business card and her eyes lit up saying, “I’ve heard of Aviance, nice to meet you” As time went on we became closer keeping in touch via email & phone and of course the occasional run-ins at the clubs. We quickly bonded and to me the whole situation was surreal. Especially a very precious moment Nicole and I shared on the dance floor at Club Pacha during THE RED PARTY with Junior Vasquez. As I was vogueing I seen Nicole watching, so grab her to come onto the dance floor and man she was a quick study! I guess all her training in figure skating and dance came in handy because the whole club stopped and everyone cleared a spot for us. Nicole says, “it was beyond fierce and at that moment I felt I was part of The Aviance Family” More time passed things got a little crazy for Nicole and needless to say, like so many "club-goers" Nicole got caught up in the scene and we drifted apart. But one thing for sure no matter what was going on Nicole ALWAYS called me for Mother's Day! I was grateful for each call she made but I also wanted to somehow help because I knew she was in distress with Meth addiction. Each time Nicole called I extended my friendship more by hinting with advice and support (in hopes she would get some professional help). Unfortunately other things transpired and sadly enough Nicole ended up in jail. Just recently Nicole contacted me to tell me she was ok and back on track! She also thanked me for being so kind during those dark moments in her life. Long story short, Nicole Bobek Aviance has gotten her life back, out of jail, off the drugs and back on the ICE! Below are videos of her progress on the Ice. Nicole say’s, “HELLO to everybody and thanks you all for your blessings”. I am personally so PROUD of her because it hasn't been an easy road to get to where she is today but it is however proof THAT ALL IS POSSIBLE! Love, Peace and Aviance Mother Juan Aviance CLICK HERE TO SEE VIDEOS: Nicole Bobek October 25th 2010 http://www.youtube.com/watch?v=CZkoSJDY5L8 Nicole Bobek October 28th 2010 http://www.youtube.com/watch?v=3ixgkIVuVG4 Nicole Bobek - November 5th 2010 http://www.youtube.com/watch?v=2-XL9A4pQ-I&feature=related Nicole Bobek - February 12, 2011 http://www.youtube.com/watch?v=ARcvJduNx-0&feature=uploademail Nicole Bobek - April 6, 2011 http://www.youtube.com/watch?v=25oi55K507w
PROFESSIONAL, PERFORMER