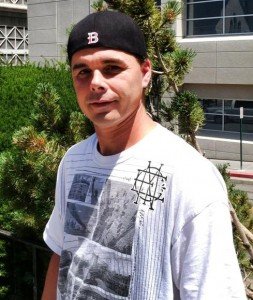 My name is Walter Saunders though most of my East Coast family know me simply as “CJ”. I am a full-time student working towards my Masters in Social Work with a minor in Business and currently employed as a full-time peer-support specialist while training to be a CADC (Certified Alcohol and Drug Counselor) whose responsibilities I will be assuming in the Spring of ’15. I moved to NYC in the very early 90’s from Boston, MA. I was a devout disciple of the Sound Factory and the fierce beats of Junior Vasquez. My love of music and of dance would lead me on a path that had me learning “new-way arm control” vogueing from the best of the best and a strong desire to belong for the first time in my life. My mission was to join the fiercest of the Houses and turn it. Having been approached by several Houses whose Mothers and/or Fathers were friends of mine, I began having doubts about this dream. It wasn’t that I wasn’t good enough as that assumption would have been a mistake. Instead it was the way in which it needed to be done that I saw as problematic; the drama, the potential shade, and the put downs that came along with it. The Ballroom scene worked for so many friends of mine and is quite beautiful. I however was never one to battle anyone without having my anger get the best of me and it getting violent. Simply put, my nature did not allow me to engage into a challenging situation without feeling the need to finish it out completely. During this time and on one of the many Sunday morning I spent on the back steps of the Factory. A certain person came up to me when I was hiding out with friends and said “Who are you and you need to come off these back steps and show yourself on the floor”. This person was none other than Mother Juan Aviance. We became very close and like clockwork every Sunday morning I would have to get me some Mother Aviance time. I would like to say my life got better but for some of us that lived that awesome yet insane time, we have no clue how we survived it. My life spiraled into a deeper and darker despair over the loss of many friends, not knowing my own place in the world, and fueled by an unrestrained taste for the illicit. I would eventually spend well over a decade in prison on the other side of the Country. One person however managed to find me while I was locked up in the side of a mountain almost 10 years after the last time we had talked. It was none other than the Legendary Mother Juan Aviance. She was the only one who had not turned her back on me even when my biological family was no longer talking to me. She told me that although I hadn’t realized it yet, there was a plan for me. One that would reveal itself out of the madness my life had become. It would take me several more years to realize that “turning it” had nothing to do with how many people I could draw in to watch me on the dance floor. It had to do with who I was as a person, how far I could take my talents into the real world, and affect positive change in those around me. This is my path and Mother Juan was able to see it before I ever even realized it existed. My long-term goal is to eventually move back to NYC and open a residential treatment program for LGBT who have desire to change their lives for the better but just need a chance and someone to believe in them. As for the dream of being part of a Legendary House? I have been part of the House of Aviance for over 20 years now. A House family who loves each other during the good and the bad, A House family defined not by how many trophies you have won but by how you show the world the true fierceness of your God given talents… thus revealing to others the true beauty and purity of the Sacred Heart of an Aviance. - Walter “CJ” Aviance
PROFESSIONAL